The military grid reference system, MGRS, is the geocoordinate standard used by NATO militaries for locating points on the earth. (more on Wikipedia) 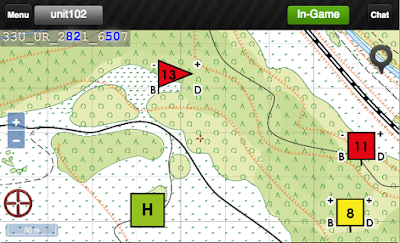 MGRS coordinate of map center is displayed in the upper-right corner.
Map is "Range Vranow", created by our user "zafa"

Recently we have announced several enhancements to the grid handling:


MGRS can express positions with different precision. We include 2x4 digits at the end of the coordinate which gives the fairly good 10-meter precision. On the image above the coordinate is 33U UR 2821 6507.
When you want to read this coordinate out, you may want to avoid characters not interesting for your communication partner. What characters are interesting and what not, depends on your situation but on milsim events most of the time the 1-km and the 100-meter digits are the important ones: They allow you to report the position with 100-meter precision on a 10 km x 10 km square only by reading out 4 numbers. So we highlight those numbers for you with blue color.


The grid drawing feature  helps you read the coordinates of any point on the screen and also to roughly estimate distances: 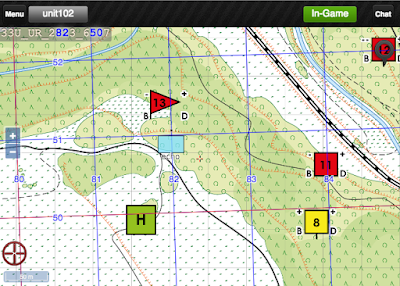 MGRS grid helps estimate distance and reading out non-center coordinates.
Note that the grid is not parallel to latitude and longitude lines, but it nearly is.

To read out a coordinate using the grid, you have to find the numbers on the left and bottom edges of the square containing it. E.g.: The point with number 13 is in the square 81 (left edge) and 51 (bottom edge) so its 100-meter precision coordinate is 33U UR 281 651.

To estimate a distance you just have to count the lines between the two points. E.g.: between point 13 and point 8 you have to cross two vertical and two horizontal lines which means that the distance is about 400 meter if you walk only "horizontal" and "vertical". This is an overestimation of the real distance, but the error is never more than 41% compared to the straight line (worst case according to the Pythagorean theorem) and you rarely can walk in a straight line so I find this estimation accurate enough.